Sometimes when programming the operations for a Multi-Axis Additive Manufacturing part, the design lends itself to being programmed using a constant number of deposition beads to complete the operation. In other words, the part design has a fairly uniform thickness, and a constant number of beads can be used to program the part. To address these types of parts, we added a new operation to the latest version of NX Multi-Axis Additive Manufacturing named Additive Track Buildup.

In the part below, the blades on this impeller are of a constant thickness, and it is determined that three beads will sufficiently build the part. Rather than performing a standard zig-zag or contour fill operation, three beads are created, one on the medial axis, and one offset on either side of the medial axis. This creates a smoother machine motion, and more consistent output from level to level. 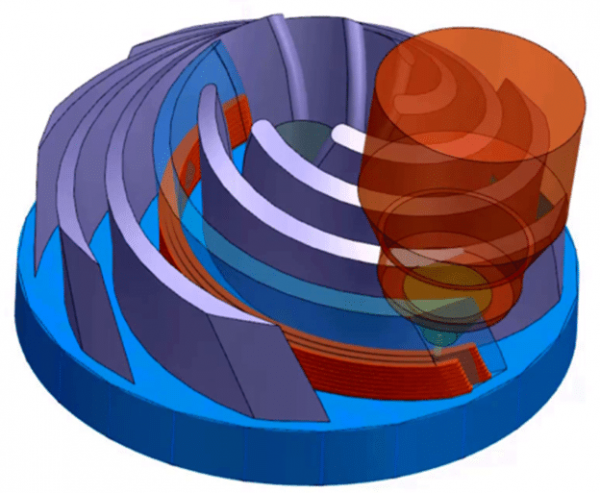 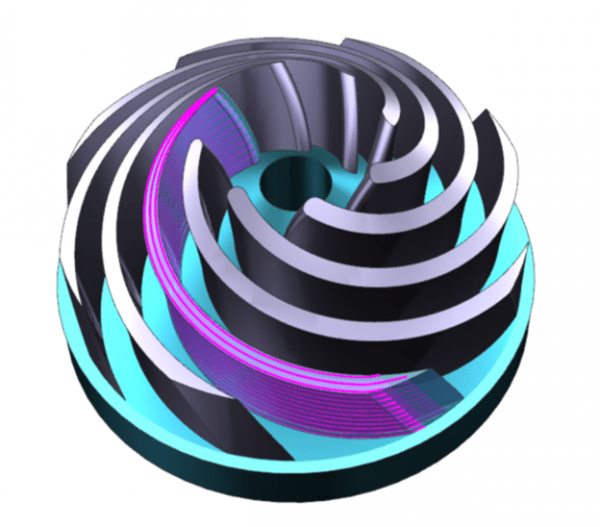 Utilizing Additive Track Buildup can make programming impellers simpler than in the past. For example, with a stereotypical impeller, like the one shown below, previously a user might create a sheet body in the middle of the blade and perform a 3D Freeform Thinwall Buildup on that sheet body to build the blade. By utilizing Additive Track Buildup, the software finds the medial axis, or middle, of the geometry, automatically and creates the output there, with full 5-axis moves consistent with the geometry shape. This method saves a considerable amount of time spent using CAD functions prior to being able to program the part.

Besides requiring the geometry to be of fairly-uniform thickness for best results, Additive Track Build currently does not work with junctions in your geometry. What this means is that the solid body should not have T or X junctions in it. You can still build the part, however, we recommend decomposing those portions and programming them separately with Additive Track Buildup.

In the part below, we can use Additive Track Buildup three different times, once for the blue solid, once for the red solid and a third time for the yellow solid. The user would then merge the three operations, which re-sorts the levels, so the three individual pieces build simultaneously on the Multi-Axis Additive Manufacturing machine. 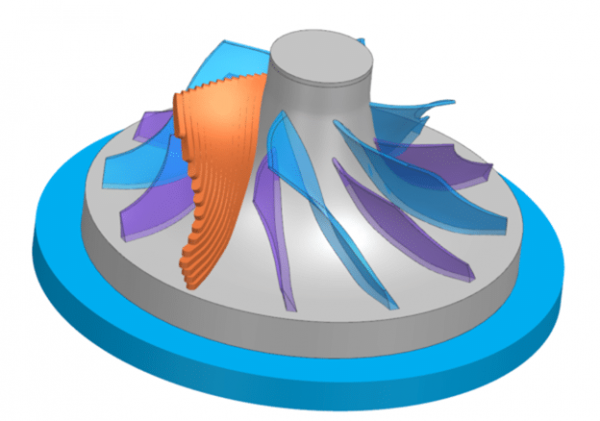 In this use case, multiple Additive Track Buildup operations are merged to simultaneously print multiple features, including the outer wall and inner ribs.

The new Additive Track Buildup operation utilizes the medial axis of constant thickness parts to create output which allows for full 5-axis machine motion, consistent output per layer, and smooth kinematic motions. In many instances, it can save overall programming time by alleviating CAD design work that was done previously.