At the time, the team used computer-aided manufacturing (CAM) software to create the tool paths they needed to drive the 3-, 4- and 5-axis operations on their Haas machine tools. This led to greater efficiency and also removed one of the early engineering problems: part variability.

As they increased their use of software to the design and simulation disciplines, they began to see significant benefits as it enabled the engineering team to capture, document, and collaborate on designs. The link between computer-aided design (CAD), CAM and computer-aided engineering (CAE) tools also led to less data import and export, fewer errors in translation and greater ability to keep engineering groups aligned on the latest parts and design updates.

By 2004, however, Hendrick Motorsports realized it had data from a multitude of sources that could and should be linked to product development, production, track operations and post-race inspection. This information could be used to help develop next-generation product design efforts.

From the beginning of their sit-down with Siemens PLM consultants, Hendrick Motorsports chose Teamcenter as their digital backbone. They capture data from a wide range of areas, not just CAD, CAM and CAE tools. Track performance data, dyne data, build sheets, etc., are all brought together with the CAD models, CAM toolpaths and CAE setups and results, providing a digital twin that is organized and linked in a way that makes sense to everyone in the organization. 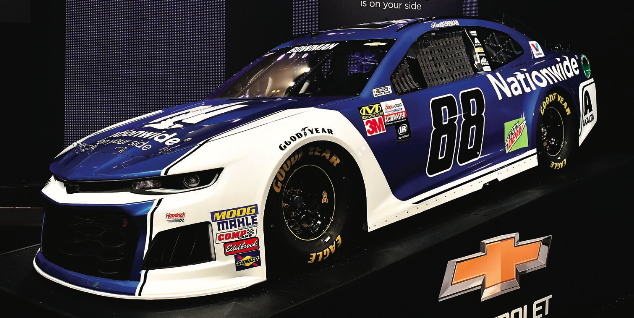 Searching for data used to take hours, days and even weeks, because people had to spend time looking through binders and file cabinets. Now, it’s just a matter of minutes.

The Hendrick Motorsports team has also been optimizing and rolling out the Active Workspace client to improve the user accessibility and experience.

Using Teamcenter helps the team get the right data to the right people at the right time in a secure environment. This means more time is spent evaluating and analyzing options.

Think of a NASCAR race team operation as a company that develops a new product release 36 times per year. Races happen whether the team is ready for them or not.

So engineering has to continuously develop and produce a steady stream of enhancements during the season. This requires a balance between prioritizing performance advantage and maintaining reliability.

Here’s an interesting aspect of NASCAR: Every week, the cars are parked in an open garage next to the other teams. This open-garage policy means the shelf life of a good idea is only a week or two.

With these changes and ideas readily available, the team has to understand what they need to be working on. They need to test new ideas and move forward with the most promising ones. And they have to constantly look for the next new idea.

Hendrick Motorsports is not making a generic car for all of 2018: They’re making a car for each specific race, refining that car until they race it and then looking forward to the races for the rest of the year. 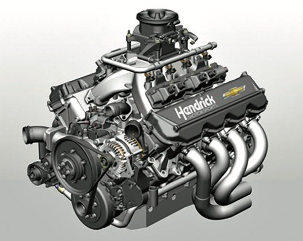 As the engineering teams work on development projects, Simcenter has become a critical part of their work. From beginning work on a new idea, engineers can leverage Simcenter 3D as a critical piece of the design process. There are typically two types of projects: new ideas for designs or modifications, and projects that come back from the track based on testing or race results.

For example, the designers noticed they were getting damage on a specific part. They applied the assembly finite element method (FEM), a key strength of Simcenter 3D, to understand what happened so they could make better designs.

Using assembly FEM allows them to investigate and understand the interactions between parts and see if and where that interaction is causing part damage or potential failure.

Since partnering with Siemens PLM software in 1997, Hendrick Motorsports has won over 300 NASCAR races and 14 championships in the three national levels, 10 at the top level.