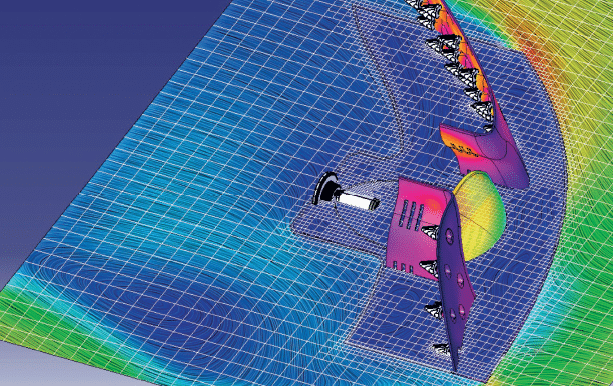 The global manufacturing industry is placing unprecedented pressure on all of its players across the board – Tier 1 automotive companies to electronics manufacturers, and all others in between. The required time to deliver products to the market is shrinking and with little warning.

This high-pressure environment requires high productivity. It forces companies to choose between doing things faster and leaner without compromising on quality or ceding their advantage to a more innovative competitor who’s willing to do whatever it takes to meet a faster delivery schedule.

Most companies prefer the first option: to meet their project milestones and get their testing done sooner, without putting in extra hours at the office or sacrificing competitive advantage. The real question then is, how do you make this goal a reality?

CFD is the answer to this question. The benefits of simulating early as a part of the design process have been documented extensively. The time and resource costs of engineering changes increase with each step from concept to production. Frontloading computational fluid dynamics (CFD), moving simulation early into the design process, is proven to help your engineers examine trends early and eliminate undesirable design options before the change becomes expensive. Top-performing companies make it a priority to assess the performance of designs early during the design process, and they promote collaboration and knowledge-sharing between analysis experts and design engineers.

Our latest white paper, Top 7 Tips to Increase Engineering Productivity by Frontloading CFD, provides you with important guidance for assessing the performance of your designs early in the design process, as well as for promoting collaboration and knowledge-sharing between your company’s analysis experts and design engineers to realize higher quality end products and greater design-to-engineering efficiency.

Testing a design only at the prototype stage can be very costly. Failed prototypes lead to missed project milestones, extra rounds of testing, and having to work long hours, among other issues.

The benefits of performing simulation early in design have been documented extensively. The cost of each engineering change increases with each step from concept to production. According to data reported by the U.S. Department of Defense, while 20% of the actual cost has been accrued, 80% of the total lifecycle cost of U.S. defense projects is determined by the test phase. In other words, the cost of a product is largely determined by decisions made during the concept phase, when little is known about the design.

Although this data is from the defense sector, commercial entities likely face similar lifecycle costs. For electro-mechanical designs, simulating early and often is equally important. The right tools have to be available at the right time so that the information can be accessed for early evaluation. This is known as frontloading.

Many frontloaded simulation tools are available for use by design engineers. About 20 years ago, the first wave of simulation tools, stress analysis, was introduced for use during the early design stages and it quickly became an integral step in the process. Now, all major MCAD vendors provide design-level stress simulation as a part of their portfolio. By frontloading stress simulation and conducting analysis early during the design stage, manufacturers did not stop simulation during the validation stage. Simulation simply became a method by which trends were examined and less desirable design ideas were dismissed. However, unlike the verification stage, during the design phase, speed is of the essence. Engineers need to simulate not only early but also often to keep in step with the speed of design changes. By iterating rapidly, engineers can discount less attractive ideas and innovate more. Once a design has been explored and identified as viable, it can continue on to the verification stage.

The practice has now spread to new areas including computational fluid dynamics (CFD) analysis – long the reserve of the specialist during the validation phase. Frontloading provides the best environment for design-centric CFD. This is similar to what in the past was called “upfront” CFD, except that here we are talking about embedding CFD in CAD, which adds benefits throughout a product’s manufacturing process.

In short, design engineers can help reduce the number of prototypes and optimize cost (through use of better materials and quality), efficiency, as well as improve company profit margins.

Frontloading CFD has obvious benefits, but do you know how to best implement it? Implementing any change requires an examination of all aspects of design and product development, including the product being designed, the process is used to design it, the designer, and the end-user of the finished product. Each consideration is a potential source of complexity and improvement. However, the process and the designer can be adjusted for immediate productivity gains. The product will be automatically improved as a direct result.

Download our CFD white paper to learn exactly how you can successfully implement CFD within your organization.

CFD technology in Solid Edge has been used by thousands of engineers around the world to frontload CFD in the design process. Solid Edge doesn’t disturb or require modification of your workflow – it fits into your process without disruption. This provides you with increased flexibility to test many design ideas quickly – when R&D costs are still low and fairly flexible. CFD tools embedded in Solid Edge help your design teams discard poor design ideas sooner, and they allow your analysts to focus on solving more complex analysis problems and verification faster.

Accurate and fast, Solid Edge is a leading solution for frontloading CFD. Simulation is an integral step during the design stage – no longer a luxury, it’s a must. Companies that embrace this change prosper. Those that do not will continue to waste precious time and resources. Can your company afford to be in the latter group?