7 years ago
Prolim
Uncategorized
No Comments

In this week’s tip, we will be taking a closer look at the Solid Edge Feature Library. Not only can the feature library be used to pull in completed parts but also previously created features in Solid Edge. This is especially useful to help reduce design time when frequently using the same features.

A feature library entry may contain any of the following synchronous elements:

**Note: You can only place a synchronous feature library member while in the synchronous environment.

A feature library entry cannot contain a mixture of synchronous and ordered elements.

**Note: You can only place an ordered feature library member while in the ordered environment.

1. With the part model open, on the left side of the screen you will see the feature library tab. Open this and create a Feature Library folder: 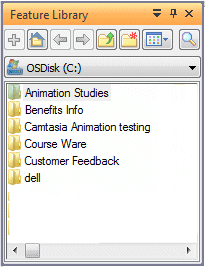 2. In the Pathfinder for your model hover over the feature you wish to copy into the feature library to quickly reuse in future models and select “Copy”:

5. To pull the created feature into a new part, open the Feature library and drag the feature you created previously into the graphic window.

6. Notice after dragging in the feature that the first row in the Feature Set Information dialog box is active, which requires that you define a profile plane.

7. After selecting the appropriate plane, you will notice that the Status in the Feature Set Information dialog box is now changed to “Defined”. You can now do the same thing with your dimensions. After doing this, these, too, will be “Defined”:

8. Once these have been defined you will notice the feature you saved to the Feature library is now present on your model. This has saved a lot of design time by not needing to recreate the cutout you used on another model.

Synchronous Modeling does not require the use of the Feature Set Information Dialog box. Saving your feature follows the same steps as Ordered Modeling but placing it is slightly different. In Synchronous, you drag in the feature then locate it using the Steering Wheel. The feature is not placed until you have clicked in the appropriate location.